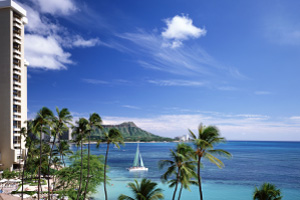 Hawaii Island is the newest and largest of the Hawaiian Islands. The area is nearly twice the total of all other islands in Hawaii, so it has been given the nickname "Big Island". The overwhelming scenery is not like anything you can see in Japan. The natural power that comes from it will give you the best relaxation. Hawaii Island is a mysterious Big Island where the volcanic goddess Pele lives.

* Please note that this information is subject to change.

Kilauea Volcano, the most active volcano on Earth, is located in the Hawaii Volcanoes National Park, 48 km southwest of the city of Hilo, The most popular sightseeing spot in Hawaii. The Hawaii Volcanoes National Park, which is also a pot, was designated as a World Biosphere Reserve by UNESCO in 1980 and registered as a World Heritage Site in 1987. The tourism highlight is the Kilauea Caldera, Caldera meaning "bigger than craters". The mouth of the volcano is large, and the road that goes around the pass is a 17.7km journey. There are other places along the road, such as the volcano museum, several observation decks, and lava tunnels. Because of the filtration, why not enjoy the power of Pelle's Fire at the biggest healing spot on the Big Island of Hawaii? 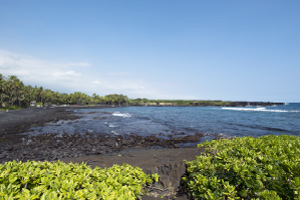 The Punaluu Black Sand Coast stretches between Hawaii Volcanoes National Park, where Kilauea Volcano is located, and a small town called Naalehu. Located on the southeastern coast of Kau, this jet black beach is one of Hawaii's most famous black sand beaches. Many tourists go to see sea turtles drying their shells on the beach, making it a popular relaxation spot. Because shellfish are are often caught resting on the beach, it may not be visible on rainy days or even when it is cloudy, so if you want to see sea turtles, we recommend going on a sunny afternoon. Speaking of southern islands, many think of white sandy beaches, but Big Island beaches are filled with black and green sand, as well as white, due to constant volcanic activity. If you are concerned about green sand, don't worry and go to "Green Sand Beach"where you can see the olive sandy beach where the olivine has shattered

Located in the northeast of Hamakua Coast, Akaka Falls State Park is a healing spot with two majestic waterfalls. Both waterfalls are accessible on foot through a paved trail that runs through the rainforest. The 6km hiking trail, where you can listen to the sounds of the Hawaiian rainforest, where wild orchids, bamboo forests, and ferns grow, is excellent for relaxation. You can see Kahuna Falls with a drop of 30m. Once you reach the waterfall, climb the stairs to the observatory and watch the water flow down the cliff. Several benches are also available and if you take a break here, you can see Akaka Falls with its drop of 135m which is surrounded by a lush and gorgeous valley, and the water flowing down towards the waterfall is a tremendous sight to behold. Immerse yourself in the negative ions at Big Island's most famous waterfall. 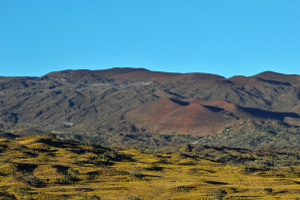 Mauna Kea has the highest altitude of 4205m in Hawaii and its name means "white mountain" in Hawaiian. In winter, this is the only place in Hawaii that is covered with snow and white which is how it received its name. Mauna Kea, which has been considered a sacred place since ancient times, is also famous for its many black stars in the dark night sky. It is considered one of the most suitable places for astronomical observation in the world because the clear sky rate is high throughout the year and there is no light around it. Mauna Kea, where you can see the romantic and beautiful starry sky, is the best healing spot. In addition, sunrise and sunset viewing are also recommended, as the color of the sea of clouds that changes from moment to moment by the sunlight gives relaxation that cannot be tasted elsewhere.

Hiro, which is the gateway to the eastern part of Hawaii Island, is the second most populous city after Honolulu, the largest city in Hawaii. However, there are no high-rise buildings, and Hiro's appeal is that it is quiet and beautiful. Originally a city that flourished mainly with Nikkei, there are many signs with Japanese names, and there is a nostalgic and emotional atmosphere. It is the most popular city during the"Merry Monarch Festival", which is held for a week from Easter every spring. This is the largest festival in Hula, named after King Kalakaua's nickname "Merry Monarch" (meaning cheerful monarch), who restored the hula that was forbidden by Christian missionaries. In the beginning there used to be a recital, but since 1971 it was changed to a competition where people compete for points by judges. Nowadays, it is as popular as a general festival that includes not only hula music and dance, but also parades and musicals.