When I'm in Hawaii, I came across the places that feels like Japan, I feel a sense of relief and I feel very relieved. Historically, Japan and Hawaii are related. In fact, many Nikkei still lived in Hawaii. Shrines and temples are the symbolic ones. Japanese people who traveled far in the sea and struggled in foreign countries built many shrines as a link to their home country of Japan and as a reference to their hearts, and some of them are still well-received. Now it is Hawaii where the face of tropical country resort's island is main right now, but if you want healing like Japan and you want deep power as Japanese, we highly recommend that you visit the Hawaii branch office by all means. A unique Hawaiian amulet is also a must see. 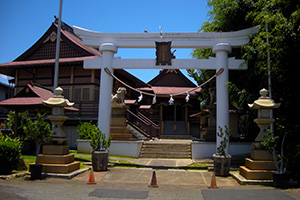 If you run the H1 freeway from Waikiki to the airport, you will see the west. It is a historical spot where seven gods are worshiped, such as Kinpira Shrine, Dazaifu Tenmangu Shrine, Shirasaki Hachimangu Shrine, Kaizumi Shrine, and Sutengu. We also have a wedding ceremony, and it is also popular to give the orthodox divine style under the blue sky of Hawaii. I highly recommend this amulet. It is a very hawaii-like color and design, and a popular item as a souvenir. The local loco also started their first visit, visited 753 and setsubun, and this is an air like Japan in Hawaii, and they are loved by people. 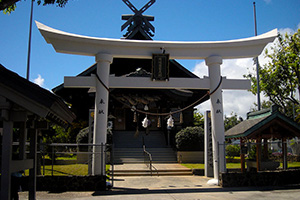 Izumo Taisha is famous for being the strongest spot of Kinkyu Shrine. The branch company here is also in Hawaii. The company is not very big, but its structure and atmosphere are full-fledged like a home. The moment you feel Japanese air you will forget that you are in Hawaii. However, the Shiba Inu who meets me through the torii is indeed aloha! I can't help but to smile to this cute and lovely ray from the neck. Please take a photo. 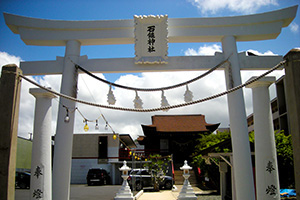 Ishigaki Shrine located along South King Street in Waikiki. It is walking distance within the tourist area, we will introduce you as a lesser known healing spot. This shrine, which was built as a subsidiary company of Ishigaki Shrine in Ehime Prefecture Saijo City, is a spot where you can feel free to visit, so it is a good idea to stop by and join hands. Amulet with a deep blue and colorful rainbow is highly recommended for Hawaii. 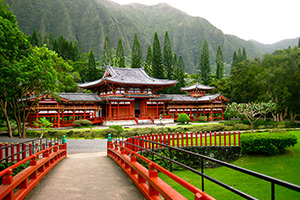 The famous Kyoto Byodo-in temple, which is drawn for 10 yen, is also in the town of Kaneohe, about a 40-minute drive from Waikiki. This is a facility built in 1968 to commemorate the 100th anniversary of Hawaiian immigrants in Japan, and is known as a tourist destination where you can enjoy authentic Japanese gardens and Japanese architecture. Calm atmosphere and calm time though it is Hawaii. The best suitable place for a healing spot is spreading. It's a spot that reminds us that this place has a deep relationship with Japan, with occasional Hawaii-style scenes being mixed.